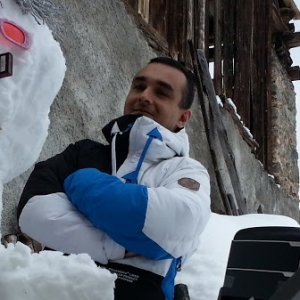 Eighty percent of Vateliens work in the Hospitality-Tourism fields for their entire careers. Some of them though, likeJean-Baptiste Karsenty, decide to work in a different field altogether.

Jean-Baptiste founded his web communication and advertising agency in 2005 in Meribel, in the French Alps. He decided to name it “La Mobylette Jaune” [The Yellow Scooter] in memory of the many hours he spent working in a garage before purchasing his own facility. Just like Steve Jobs.

So here’s the Success Story of this Vatel Lyon 1998 alumnus. He’ll tell us about why he chose Vatel, his internships, his first jobs in hotel management, why he changed careers and how being a Vatelien helped him found his own company.

Jean-Baptiste, why did you decide to attend Vatel?

What internships did you do while you were in school? What jobs did you have?

My first one was at the four-star Voile d’Or Hotel in St Jean Cap Ferrat: two months in the kitchen and two in the restaurant.The second and third were in the same place, in England, at the five-star Danesfield House. This double experience was a very rewarding one because my first job was as a housekeeping assistant, then the deputy manager in the bar and at the front desk. A very complete internship in the entire hotel.

And finally, when I finished my third year internship, the same hotel hired me and little by little I was promoted until I managed the hotel. A long climb up the corporate ladder when you know I started as an assistant trainee!

What kind of opportunities have you had since you graduated up until you created your web company?

I met my wife in England in this hotel. She’s from Meribel in the French Savoy region and she persuaded me to come back from England to her home town in the mountains. There, I worked for six more years in hospitality as the Assistant Manager in small hotels in Meribel. And it was just a chance meeting with one of my wife’s childhood friends in 2005 that I decided to work with Internet. It was almost back to base one, as I had to learn just about everything, except for the solid management fundamentals that I had learned at Vatel.

How was La Mobylette Jaune founded? Can you please tell us a bit about your Web agency?

As the legend goes, La Mobylette Jaune was founded in a garage shared by two friends who loved Internet. I would say that it was more a human adventure than a desire to go into business. We started out with next to nothing: two wooden shelves and two computers. I kept on working as the assistant manager in a hotel for a year to be able to launch the company correctly, and after 14 months, I decided to quit working in the hospitality field.

Today our agency has grown and now employs five people all year round, which is quite rare in mountain ski resorts. We work with large groups, which will allow us to think about a national expansion in the next few years.

What memories do you have of the years you spent at Vatel? How did your Vatelien profile help you found your company?

What are you short, mid and long-term projects?

I’ve achieved two of my childhood dreams. First, working in hospitality and second, I wanted to create advertising content.Vatel helped me fulfill my first dream and today, I’m living my second one with my job in communication and advertising.

It will soon be my tenth anniversary in my new career. In the short term, La Mobylette Jaune will continue to grow and open new agencies in other ski resorts in the Alps. In the mid or long term, I’ve already had offers to restart my first career, in hospitality and tourism management. But, who knows?  The future’s not ours to see.

Read more
Press Books
OUR MISSION - Preparing the younger generations for a successful career in International Hotel and Tourism Management
Find your course in 3 steps Request the brochure Send a message
Vatel serves cookies to analyse traffic to this site. Information about your use of our site is shared with Google for that purpose. Read moreOK